The entire staff at The Pin People are pet owners and animal lovers.

This month’s feature pin pays tribute to a Regina dog rescue near and dear to our hearts.

CCRezQs is an organization dedicated to rehabilitating, providing medical treatment, fostering, and ultimately finding dogs and puppies a forever home.

We loved working with CCRezQs to design this custom “no bad dogs” pin. The sales from these and other merchandise will help offset their 2020 medical costs.

For information on pin sales (and cute puppy photos) be sure to check out their Instagram page or website.

This polar bear Canada pin was commissioned by and custom-made for one of our long-time pin collector friends, Ron Finnigan of Burlington, Ontario.

Ron has been trading pins since 1984. He has travelled to eleven Olympic Games and a total of thirty multi-sport games across Canada and around the world.

His most recent games were the Lima 2019 Pan Am Games. He is planning to attend both the Caribbean Games in Guadeloupe and the Olympics in Tokyo next summer.

We at Laurie Artiss Ltd. The Pin People appreciate Ron’s integrity and his dedication to fairness and education to all collectors, young and old, new and experienced.

This is one of our Moveable Lapel Pins. A pin that has moving parts that can be played with manually, it doesn’t move automatically … yet. 😉

This pin was produced for the RBC Bank. For their Commitment to Diversity. Diversity for growth and innovation. 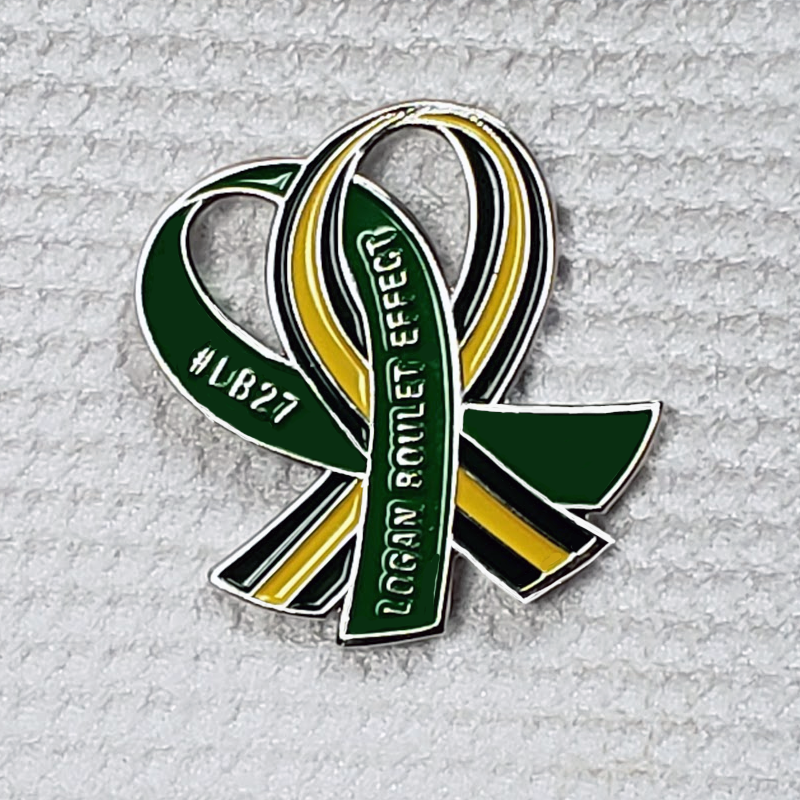 REGISTER AS AN ORGAN DONOR

The Pin People is honoured to have produced this special pin for the Boulet family. The family put much time and careful thought into the final layout.

The design includes two ribbons. The ribbon on the right pays respect to the Humboldt Broncos, Logan’s last team, with the Humboldt Bronco colours of green and gold. The ribbon on the left is the green ribbon for Organ and Tissue Donation. Logan was a kind person who continually put others first, a true team person. His needs were never “I” centered, but “we” centered. His decision to become an organ donor is a demonstration of that characteristic. Also included on the pin are the words “Logan Boulet Effect”. Named so because Logan’s unselfish act of organ donation inspired over 300,000 Canadians to become registered organ donors in Canada as of April 7, 2019.

The Friends of Logan Boulet Golf Tournament has been set up to raise funds for numerous charities including:

The tournament runs for three years, 2019, 2020 and 2021, reflecting the three periods of a hockey game. Each participant and volunteer at The Friends of Logan Boulet Golf Tournament receives this commemorative pin.

A day never goes by when Logan’s father does not wear this pin proudly on his chest over his heart.

There is an odd symmetry to Logan Boulet’s gravestone placement. It’s not only a result of the picture of his smiling face carved into the shiny black granite or even the breathtaking view of the Lethbridge coulee visible from this peaceful spot at Mountain View Cemetery.

Rather, in the row right in front of Boulet’s stone is the marker of Richard (Sluggo) Suggit — a boisterous rugby coach who decided to donate his organs, before he died suddenly at the age of 58 on June 27, 2017. His action influenced Boulet, a young hockey defenceman, so profoundly that he decided at the age of 19 to sign his organ donor card as soon as he turned 21, on March 2, 2018.

The pair became close after Suggit, who coached the women’s rugby team at the University of Lethbridge, volunteered to train Logan and three of his friends in the off-season of junior hockey, perhaps as a way to thank Logan’s dad, Toby Boulet, for being the volunteer manager of his team.

Logan was a pallbearer at his beloved trainer’s funeral and took his many lessons to heart — not least of which was the decision to donate that strong, generous heart of his, along with other organs, upon his death. Suggit’s organs were all in great shape, as he died from a brain aneurysm. His actions led to Logan’s decision to also become an organ donor. 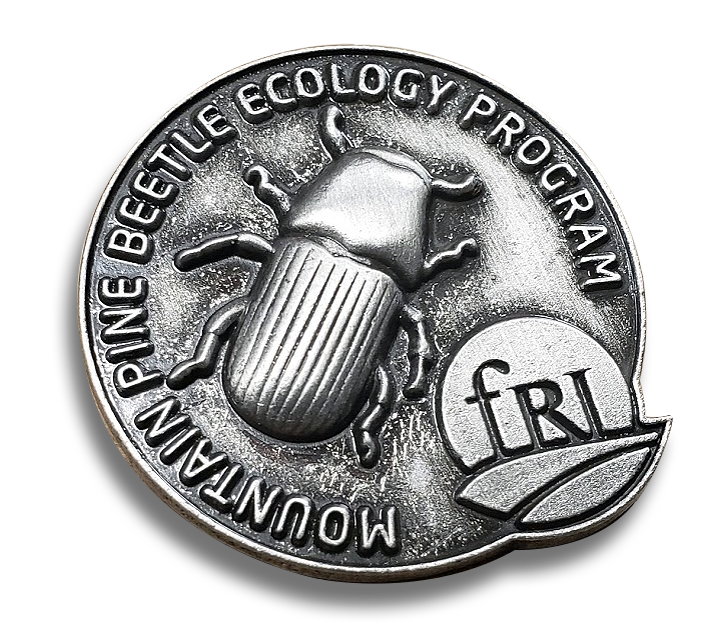 I would like to tell you how awesome it has been to work with you to get these pins done and sent out. Great customer service.

This custom lapel pin is 1 1/4″ in size with a butterfly clasp. The lapel pin is made of a zinc alloy with an antique silver finish. No enamel colours are added.

The pine beetle is represented in 3D/cubic relief.

Adding the program name and corporate logo to the lapel pin completes the design without making the pin overcrowded.

It certainly is a conversation starter!

The program carries out focused research on infestations of mountain pine beetle in Alberta.

fRI Research implemented a Mountain Pine Beetle Ecology Program in 2007 to carry out research on the beetle’s biology, its effect on the landscape, and the effectiveness of various management strategies.

Mountain pine beetle (MPB) is spreading east, threatening vast areas of Canadian forests. Knowing where infestations are is key to managing the problem.

fRI Research is a non-profit corporation powered by a world class research team who position us as a leader in science for land and resource management in western Canada and beyond.

Led by an engaged board of directors, we are building on the legacy of the Foothills Model Forest and the Foothills Research Institute as we provide science-based solutions for our partners.

A lapel pin for every occasion!

Lapel pins have been popular for decades–used to commemorate special events or as badges to show distinction.

Pin collecting and trading has also become a  popular hobby. In fact, the Olympic Games, pin collecting is considered a sport by many!

Some reasons for producing lapel pins are:

Having an event? Fundraising for something special? Celebrating an occasion?

The Pin People would be happy to help you develop a custom lapel pin!

We would like to create a Custom Lapel Pin for you
;

Need help getting your message out?

The professionals at the Pin People will help design and produce your lapel pin.

Every month or so, we select a lapel pin to feature here to help spread the word about a worthwhile endeavor. Maybe yours will be next!

It starts with a quote.

If you are thinking about a custom lapel pin for your team, business, event or fundraising opportunity please fill out our quote form.

Did you know that there is no additional charge for artwork when you order your lapel pin with us?